Congratulations to the 2018 SACMA winners, who were Kate Centnere, Bryan Ormond and George Horsley

Kate Centnere is the Marine Logistics Manager for the Thames Tideway East JV.

Despite the challenges of historical working practices by Watermen and Lightermen on the Thames Kate has been accepted into the Thames marine community by her own hard work and pursuit of relevant qualifications many of which were gained by studying in her own time. Kate is now so well respected by the main Marine Providers and River Authorities on the tidal Thames that she was invited to become a member of The Company of Watermen and Lightermen (A City of London Guild).

She is seen by our client as an example of how to transform the Thames marine community into a high-performing sector of industry (former Thames Barrier staff might never have thought they would ever read those words!). Kate has also led Costain’s involvement in the Thames Skills Alliance established to raise the level of training across all sectors of the Thames Marine Providers.

It is unusual for the judges to receive citations from 3 sponsors which was the case with Kate’s nomination and it was readily apparent from these that Kate is an exceptional lady who launched herself into the male dominated Thames marine community and by sheer hard work, studying and personal development became not only respected but invited into membership of the Company of Watermen and Lightermen.

Declaring her a winner of the SACMA award was an easy decision for the judges!

Bryan Ormond is a Civil Engineer on the Thames Tideway Tunnel JV.

Bryan has progressed his post-graduate training towards attaining CEng. MICE status in a remarkably short time, during which he has developed ground breaking new techniques and new data and asset analysis methods much to the delight of one of our clients who has adopted them. Bryan’s relentless drive to increase efficiency through innovation has proved invaluable to the successful completion of the two projects he worked on prior to joining the Thames Tideway Tunnel project.

Bryan’s Innovation was the particular attribute that captured the judges’ attention and Bryan demonstrated this in abundance. Whilst he was still progressing through the Costain Graduate Scheme he was tackling and solving design, method and data problems that would normally be dealt with by engineers with far more experience.

George Horsley is a Site Engineer on the London Bridge Station.

George is the youngest winner this year. He started with Costain as an apprentice joiner before joining the Costain Engineering Apprentice Scheme. Having completed his BTEC level 3 he is now studying for an HND in Civil Engineering on a day release course. His on-site experience as an apprentice joiner has taught George to place the welfare of site staff and operatives high on the agenda when planning site works in his present role as site Engineer, a position he earned when, through staff changes on his then project, he willingly took on much greater responsibility, planning and executing his work to high and safe standards whilst still studying for his HND.

Apprenticeships were always highly valued by Sir Albert Costain, in memory of whom these awards are made, so it was an easy choice of winner for the judges who recognised the way in which George had progressed from apprentice joiner to apprentice civil engineer combining the practical skills he had learned on site with the academic courses of study he was able to follow through the Costain Apprentice Scheme as well sheer hard work along the way. 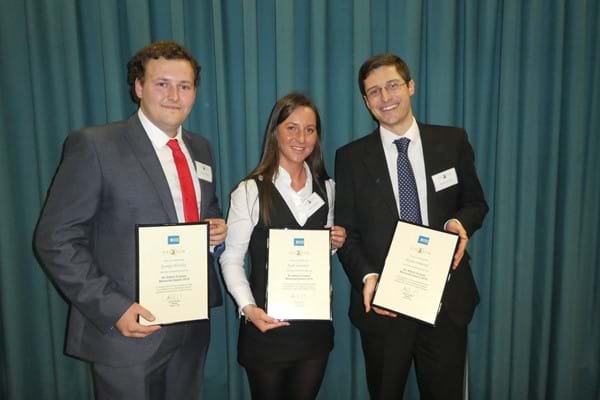